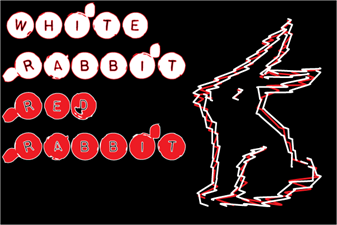 A different actor every night

And while modern theatre audiences have become accustomed to being told to switch off their mobile phones before the start of a play, those attending White Rabbit, Red Rabbit, a new work from 29-year-old Iranian writer Nassim Soleimanpour, are specifically instructed to keep their phones turned on. Why?

Soleimanpour is not allowed to leave his native Iran, as he is a conscientious objector who has refused to take part in military service, which is mandatory for all Iranian men. Unable to travel, Soleimanpour has turned his isolation to his own advantage with a play that is written in English, but which requires no director, no set and a different actor for each performance. Each performer reads Soleimanpour's script for the first time on stage. "The audience are given my email address during the show," the playwright explained via email from Iran, "and they can send me photographs and notes by mobile phone."

White Rabbit, Red Rabbit is an absurdist adventure which sits on the boundary of comedy and drama, and its unique structure and power resides in the sheer prominence of the author’s voice as it transfers from fresh pages to the stage. Axiom Repertory Theatre could not be more proud in bringing this unique vision to Redding, California. Some of the responses Artistic Director Ken Hill has received from local North State actors asked to perform the show are “this is terrifying…exciting…I can’t wait…my heart stopped while my toes swallowed my guts.”

It’s going to be a different show every performance. Once an actor has seen or appeared in the show, they are not permitted to ever be in the show again, though everyone is encouraged to see it more than once!

Ready to join the Redding Chamber of Commerce?
BECOME A MEMBER

Friday
By Appointment Only